The FC1700C replaces the FC1600C and is equipped with a larger, 120-horsepower Tier 4 Final Cummins engine. It is designed to be versatile and handle such projects as large parking lots and rural roads. It can pave at 8 or 15.5 feet without the need to shovel asphalt at the end gates.

Dynapac road construction equipment has released the second generation of its commercial class pavers, with upgraded engines, controls and screeds. 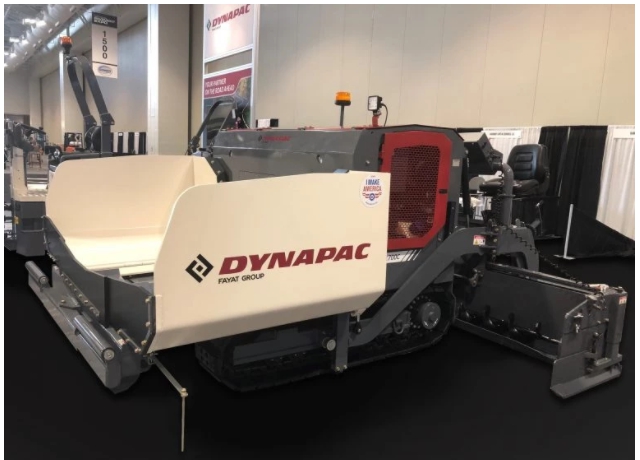 The paver also has best-in-class paving quality and density behind the screed, due to its 4,500-pound VF0816 screed and mounted four auger system, the company says. Dynapac says its “fail-safe screed heating system” leads to uninterrupted heating to the screed plates.

The tracks are wider, at 14 inches, for better traction when paving on soft surfaces. Dynapac says it added operator controls that are more intuitive and put color displays on both consoles. The displays include screed heat and pile height controls. A “Pave/Resume” feature returns automatic feed and travel functions to the previous state when stopped for truck exchange.

The mid-sized paver now has a 74-horsepower Tier 4 Final Cummins engine that does not require diesel exhaust fluid.

The 3,200-pound VF0814 screed offers best-in-class density and mat quality and reduces the need for multiple passes, the company says.

It has a screed-mounted four auger system and can pave at 14 feet wide. The screed comes standard with electric heating instead of the gas-heated version on the previous model. The heat system has a 12-kilowatt generator that is attached directly to the diesel engine for a faster heat cycle and increased efficiency.